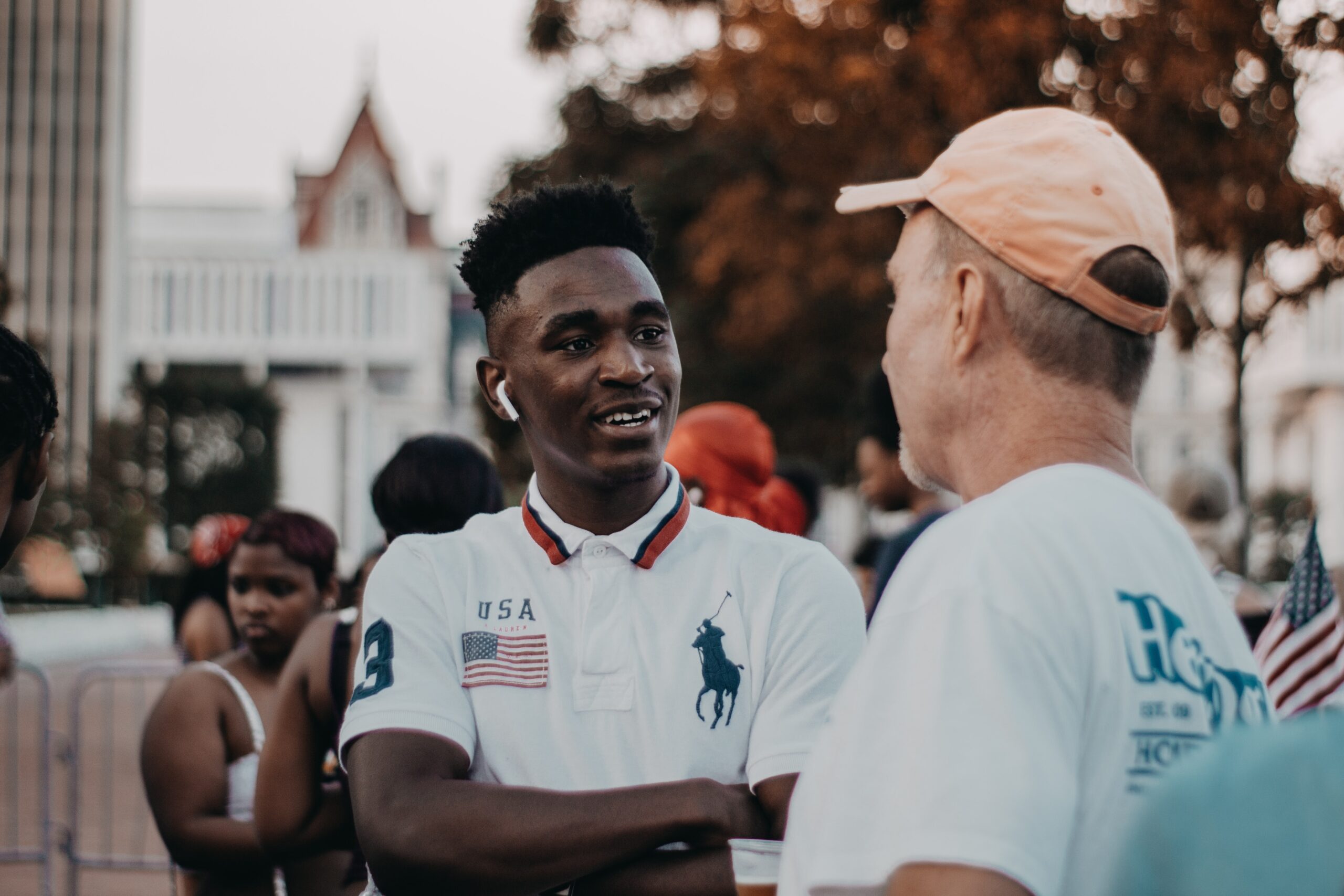 As I begin, I am reminded of the apostle Paul’s autobiographical appeal, “Would to God you could bear with me a little in my folly” (2 Cor 11:1). Please, bear with me as I share some personal details to set the context for this article.

I am an alien. Not the ‘ET’ kind, rather, the political kind. My citizenship is in the USA but for thirty years I have been a permanent resident of South Africa.

I, and my wife and four-year-old and two-year-old daughters, moved to Johannesburg in May 1990.  Though initially we planned to temporarily live in Hillbrow, doors opened for ministry in ‘the South’, where we have now lived for three decades.

We have resided here during times of great uncertainty, such as when the AWB was insanely threatening to take over the country. I remember the day that Chris Hani was assassinated at his home while collecting his daily newspaper. l can recall the deep tensions and anxieties which followed and how, by God’s mercy, this was relieved by the strong and humble leadership of Nelson Mandela. I remember the attempts of CODESA I and CODESA II to hammer out a transition to a more democratic society and how when these failed, the Multiparty Negotiating Forum, led by two youngish men, Cyril Ramaphosa and Roelf Meyer, experienced far more success. I still have a mental picture of those two men often smiling together even though at times they had serious disagreements. They modelled what it looks like to listen to opposing views when striving together for the goal of harmony. I also recall the hammering out of an interim constitution and the back and forth and the ups and downs wondering, “Where will this all end?” But finally, election day, or should I say, election ‘days’ were announced.

I doubt I will ever forget the snaking ques at the polling stations during those four memorable days in April 1994 as the nation voted in South Africa’s first democratic election. I remember how the Government extended the voting holiday in order to make sure all could participate. There was a celebratory-like atmosphere as people cast their votes for nineteen parties representing a host of political and economic philosophies, from the ANC to the NP, including the KISS and Soccer Parties!

The past 26 years of Democracy have brought about cause for both strong optimism as well as cause for deep pessimism. Politically, socially, and economically, it has been a roller coaster of expectations and emotions. And that was before the coronavirus! But in recent days, the wide-spread racial tensions in South Africa have been exasperated both by local sins as well as by the horrific and hateful death in the USA of George Floyd, a black man, by a white policeman.

The effects of racism, highlighted in recent years by Black Lives Matters, knows no political or geographic boundaries. The sin in faraway Minneapolis has affected our local Metropolis. Racism, which is a continual problem in our country, is once again at the forefront of a multitude of discussions on a multitude of platforms. Christians are engaging in the conversation. Some helpful, some unhelpful and some, sadly, harmful. This article is my attempt to contribute to the discussion with the goal of being helpfully constructive. You will be the judge of that.

Despite my ‘biography’, I remain, in some ways, and to some people, an outsider. I get that. For this reason I am sometimes hesitant to speak to some issues. But in this article, I want to break my silence.

I realize that in doing so I run the risk of being misunderstood. I type with fear and trembling because the last thing I want is to add to the angst that seems to be dividing evangelicals in this discussion (though ‘discussion’ is hardly what characterizes much of the debate). I am particularly concerned about potential division among conservative, reformed evangelicals.

I have been blessed to see the growth of the biblically reformed church in South Africa over the past thirty years. In fact, I am a by-product of this gracious work of God, having embraced the doctrines of grace and a more robust biblical ecclesiology since my arrival in South Africa. I have a particular affection for our association of Sola 5 churches. This affection motivates me to write. I don’t think I am writing as an American, and neither do I believe I am writng as a South African. I am simply trying to write as a Christian, one who happens to be an American making his life in South Africa. I suppose you could view me as a Christian-American-South African. But that is rather confusing. So, please listen to me, as a brother in Christ.

‘Listen.’ In many ways, this the operative word. With all that is being said about racism, there is plenty of opportunity to listen. But I wonder how much listening is actually happening. Too often we only pause while the other person is speaking in order to catch our breath before opening our mouths again. But as James exhorts, we are to be “swift to hear, slow to speak, slow to wrath; for the wrath of man does not produce the righteousness of God” (James 1:19-20). From much of what I am observing, many are quick to speak, slow to hear and therefore, with great speed, they are angrily not accomplishing the righteousness which God requires. Brothers and sisters, we must, for God’s sake, listen!

Christians of all ethnicities must learn to lovingly and discerningly, listen to one another. Acts 6:1-7 provides a wonderful example of this.

The early church in Jerusalem was composed of both Hebraic and Hellenized Jews. And where there are different cultures, there is bound to be potential for conflict. Sure enough, the Hellenized widows sensed they were being neglected in the daily distribution of food and material substance. The implication was that the Hebraic widows were being favoured. Hence arose a movement, “Greek Widows Matter.” I’m not being facetious. I am making an important point: the first interpersonal conflict in the early church was one of culture, perhaps even one of ethnicity (some believe the Greek speaking widows were Gentiles). And how did they overcome this conflict? Not by the easy and flippant response, “All widows matter!” No, they did the more difficult thing, they listened to those who expressed their sense of being disenfranchised.

There is no defensiveness – anywhere! – in this story. The Hebraic ‘party’ did not argue against the Hellenized ‘party.’ Rather, they listened to their complaint, took their concerns seriously, and pursued a constructive plan to “guard the unity of the faith in the bond of peace” (Eph 4:3).

I find it instructive how the church responded. They selected and elected, and the apostles appointed seven men whose task was to make sure the Hellenized widows were not neglected. What strikes me is that this predominantly Hebraic church selected seven men who all had Greek/Hellenized names (v. 5). Hmm. Those with the numerical ‘power’ selected and elected those who did not. If you listen closely, you will hear the harmonic sounds of the love of Christ.

It sure seems to me that rather than both sides digging in their heels and launching verbal bombs, they chose to take one another seriously. They must have listened to each other. What could have become a systemically entrenched pattern of neglect, was overcome by the love of Christ exemplified, in this case, by listening to those who were hurting.

This will not be the only time the early church will face such conflict, and in a future article(s) I plan to explore this. But for now, let’s agree that inter-personal, cross-cultural conflict was overcome by first, a commitment to raise a complaint, and second, a commitment to listen to that complaint. And this resulted in a constructive solution. If Christians apply this practice of speaking and listening to complaints about racism, we can be hopeful for a God-honouring harmony.

The account ends with the wonderful encouragement, “Then the word of God spread, and the number of the disciples multiplied greatly in Jerusalem, and a great many of the priests were obedient to the faith” (6:7). Church growth occurred in the context of multi-cultural-gospel-driven-harmony. Like that local church, if we learn to listen to one another in the Body of Christ, maybe those outside will listen to us as well. And as people are converted and as the church matures in its love, God will be glorified. Therefore, for God’s sake, let’s listen.